Tick season is in full swing this summer, increasing your risk of developing Lyme disease. Lyme disease is spread by the bite of the Ixodes tick, usually no bigger than a pinhead. Because a tick is so tiny and its bite is generally painless, the tick is often hard to detect. Unfortunately, if not promptly diagnosed and treated, Lyme disease can cause serious problems involving the eyes, heart, joints and nervous system.

The number of cases of Lyme disease has been on the rise since 1990. The US saw an increase from around 8,000 cases in 1990 to over 39,000 in 2009. The states with the highest number of cases are Connecticut, Rhode Island, New York, New Jersey, Delaware, Pennsylvania and Wisconsin.

Your Skin is the First Indicator

Lyme disease is caused when a tick passes on the spirochete bacteria known as Borrelia through its bite. According to the Center for Disease Control and Prevent, 70 to 80 percent of infected people develop a round red rash, called erythema migrans, in one or multiple areas on the body within 3 to 30 days of the tick detaching from the skin.  The rash may be solid red, clear centrally as it expands, forming a ring, or may have multiple concentric rings called a “bulls-eye” appearance. The rash is commonly about four inches across when seen, but may cover large areas of the body. The rash can last for a few days or for more than a month and may be painless or can feel painful, itchy or hot to the touch. 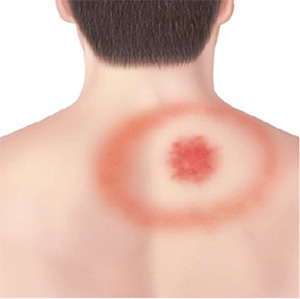 Other early symptoms of Lyme disease include flu-like symptoms, low-grade fever, fatigue, headaches and muscle or joint aches and pains. Later stages of the disease don’t develop until weeks or many months later. Many complications can follow an untreated case of Lyme disease. These include meningitis (stiff neck, headaches, vomiting, fever), Bell’s palsy (paralysis of part of the face), heart block and irregular heartbeats, painful joints, muscles and bones.  Lyme disease is diagnosed based on symptoms, physical exam with your dermatologist and probability of exposure to infected ticks.  Laboratory testing can be helpful, but only if used and interpreted correctly and performed with validated methods.  Early treatment typically consists of orally administered antibiotics.

If you are experiencing a suspicious rash and aren’t sure what the underlying cause is, the skin health experts at Forefront Dermatology are ready to help.  To find the Forefront dermatologist nearest you, visit our locations page today.